If you are looking to improve your long game, you are in luck.

Titleist Velocity has been designed to help you get those extra yards on the golf course. This Titleist Velocity review will compare different models in this series and help you figure out which one is the best for you.

Whether you’re hitting off the tee or swinging with your irons, this ball will go farther than any other option on the market.

Velocity has been in the game for a while now. Over the years, Titleist has had the chance to make several changes, leading to unique models.

The entire Velocity series has one major theme: distance. Each model has tried to outdo the last one in this category. There have been subtle changes as well in a few other categories. Softness improved leading to better control, while more colors were introduced over the years. 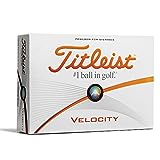 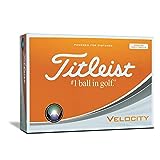 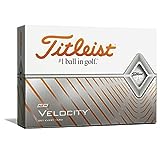 Before we dive into the Titleist Velocity golf ball review, it is important to understand something. There is no such thing as a universally perfect golf ball. It all depends on your preferences and playing style.

The proper method is to practice with different types of balls and see which one is best suited to your style and proficiency.

As mentioned before, if the distance is your main goal, the Titleist Velocity line is your best friend. These balls are designed to go the extra yard, which might be just what you need to get to your desired length. This section will talk about the earlier generations of the Velocity balls.

Depending on your style, you might prefer them over some of the newer models.

Titleist Velocity is made for players who want the most distance out of their balls. This has been mentioned several times, but how much distance are we talking about exactly?

The exact measurements will be discussed later, but it was certainly the longest ranging ball in the Titleist family for a while.

One might think that this may lead to poorer control around the greens, but the ball holds up surprisingly well. It is a two-part ball with a big LSX core and a thin NaZ2 covering. Titleist claims that it is the size of the core that enables the ball to traverse such great distances. It also has a higher launch angle than most of its competitors on the market.

I know you must be tired of hearing about the distance, but it is Velocity’s biggest selling point. For instance, let’s compare it to the much more expensive Titleist Pro VX1. The Pro VX1 is a premium, Tour-level ball that is supposed to be the company’s crown jewel.

According to computerized tests, the average distance that the Pro VX1 travels is 277 yards. On the contrary, the Velocity covers an average distance of 282 yards. This is a considerable difference.

The comparison with Pro VX1 brings me to my next point: price. Velocity is a great cost-effective option on the market. A lot of golfers prefer this line because you get the biggest bang for your buck.

Furthermore, it performs decently around the greens for a ball that lacks spin. While its control is not as good as the Pro VX1, it has features that allow it to do well enough.

For instance, the thin NaZ2 covering, along with the dimples, allows it to have a steep descent. This increases the stopping power around the greens.

Some people have complained about its durability. Despite Titleist’s claims of its robustness, golfers have given negative reviews for early scuffing. Sometimes, on the very first few swings, the ball gets damaged.

The average ball control quality can be a problem for some golf players. However, it should be mentioned that if the golfer has a habit of overestimating their shot, this ball will do just fine.

Titleist’s Velocity is certainly an interesting ball, to say the least. It gives the golfer great lengths with a controlled roll due to the steep fall. However, for some shots, this ball can hurt you around the greens. Like we mentioned before, it all comes down to what you value most in your game.

Over the past few years, Titleist has progressively bolstered Velocity’s main features while trying to reduce its downsides. The 2020 version, therefore, represents the apex of the design. With the Velocity 2020, Titleist has attempted to go all out on the key features and has thrown in some extra ones too.

Just like its predecessors, the 2020 model prioritizes distance more than anything else. The size of the core has been increased, which allows it to cover even larger distances, believe it or not.

Obviously, this meant that the outer NaZ+ covering had to be made thinner. This has led to a lower long-distance spin, which further contributes to the length.

Titleist has shifted the design in such a way so as to add an iron stoppability feature, which will be discussed later. Furthermore, the outer surface’s topography has been enhanced. The surface now boasts 350 octahedral dimple patterns, which increase the velocity of the ball.

It is as if Titleist knows no limit for distances. With each model, it outdoes itself, adding a few more yards to the golfer’s arsenal. The iron stoppability feature is another nice twist. It allows the golfer to have better control over the ball from their iron shots.

Hence, people who have been complaining about the lack of control should feel slightly at ease using this ball. Of course, it is not on the same level as the Pro V1x, but it is definitely an improvement.

Furthermore, earlier models were considered hard against irons. In the 2020 model, the hardness was been reduced slightly. It is not as soft as some of the other options such as the Titleist AVX, but it definitely does not feel like a rock when swinging.

The added number of dimples and change of shape has enhanced the aerodynamics of the device as well. This has allowed the flight to have a higher trajectory, leading to a more controlled landing.

Another plus point is the additional choice in colors. Not only has green been added, but the balls have also been given a suave, matte finish. While this may not be a factor in performance, people will have better options for selecting balls that match their personal preferences.

Surprisingly, price is an issue with this ball. Although it is still a cost-effective option compared to some other balls, it is definitely more expensive than its predecessors.

“Get every yard.” This is Titleist’s motto for the Velocity line, and it surely lives up to it. Personally speaking, I believe that the 2020 model is indeed the finest one yet with maximum distance, great height, and reasonable control. Plus, one gets to express who they are through a wide variety of sophisticated, matte-colored options.

As you would have gathered while going through the Titleist Velocity balls review, there are several factors that need to be considered while purchasing a golf ball. Your decision will be influenced by what features you desire in your balls. A player looking for a high spin will buy a totally different ball than one wanting long distances. Your expertise level determines your ball choice a lot. If you are a beginner, you should stay away from expensive balls and practice with some cheap ones. Once you level up, you can fine-tune your game with more premium balls. Master the basics first.

Strength Around the Greens

Some golfers want to feel the ball at short distances. According to them, it helps them be accurate with their close-range putts. A soft golf ball, therefore, would be much more useful for performance around the greens.

Golf is an expensive hobby. You don’t want to make it worse by constantly buying new balls. Invest in some durable ones.

Color helps with the ball’s visibility. If you have difficulty seeing the ball travel through the air, it is better to opt for a non-white option.

Nature of the Golf Course

The surface of the golf course also plays a role in what type of ball you should buy. If you are playing on a hard-surfaced golf course, buy a soft golf ball. The hardness will make distance less of a problem, and you can have better control around the greens.

Always buy a pack of three if you are unsure about trying a new ball. Buying one is too little and buying a dozen is too much.

After going through so much information, you will surely have some questions. Buying the perfect golf ball is a nerve-wracking decision. Even with all the information in the world, people find it hard to finalize a purchase.

It is natural to feel overwhelmed and, therefore, customers ask tons of questions. The following are some of the most frequently asked questions by consumers.

It all depends on your preferences and goals, as mentioned above. For instance, the ball is great for distance-hungry players.

✅ Is Titleist Velocity the Longest Ball?

Titleist claims it is the longest ball the company has ever manufactured.

✅ What Compression Is the Titleist Velocity?

The compression of Titleist Velocity is considered high.

This Titleist Velocity review clearly conveys that if the distance is what you want, Velocity is what you are looking for. It is not meant for Tour-level performance, and it is not the best around greens. If you purchase the Titleist Velocity 2020 golf balls, you would be able to get a lot more for your compromises around the greens. This latest version can be considered a good, all-rounder ball with long results.

TwinGolfer.Com is a participant in the Amazon Services LLC Associates Program, an affiliate advertising program designed to provide a means for sites to earn advertising fees by advertising and linking to Amazon.com. *Amazon and the Amazon logo are trademarks of Amazon.com, Inc., or its Affiliates.
Scroll back to top
error: Alert: Content is protected !!